Hi Friends, here are the some of the new novels releasing this month from American Christian Fiction Writer member authors. More in-depth descriptions of these books can be found on the ACFW Fiction Finder website.

The Art of Rivers by Janet Ferguson — Can a woman whose life has been damaged by addiction trust her heart to a man in recovery? (Contemporary Romance, Independently Published)

Cross My Heart by Robin Lee Hatcher — Horse rescue farmer Ashley helps Ben start an equine therapy barn on his great-great grandfather’s farm. When they consider a relationship together, her bitter experience with her opioid addict brother reins in any hope for a future with Ben, who is five years in recovery from alcoholism. Ben knows that with God, all things are possible—but will Ashley find it within herself to give love a chance? (Contemporary Romance from HarperCollins Christian Publishing)

Risking Love by Toni Shiloh — Nikki lives with a perfect trifecta of noes. No guys. No dates. No way. After years of keeping men at bay, Nikki Gordon has it down to a science. No one, not even sweet, hunky Shorty Smalls can change her mind. Period. So if she’s got it all figured out, why does her heart sink to her toes when she sees Shorty with another woman? (Contemporary Romance from Celebrate Lit)

Uncharted Destiny by Keely Brooke Keith — When Bailey sets out to rescue her lost friend in the Land’s dangerous mountain terrain, she discovers more about the Land—and herself—than she bargained for. (General from Edenbrooke Press)

Six Houses Down by Kari Rimbey — Two days after Sharon Webster’s distant husband returns for a surprise visit, their autistic son slips out of the house and is lost in historic Washington D. C. As they search for their boy, Sharon is forced to rely on the husband she believes no longer loves her. An elderly black couple down the street seems to understand her unspoken hurts. Has God sent them to help her find trust again? (General Contemporary, Independently Published)

The Medallion by Cathy Gohlke — The Nazi blitzkrieg of Warsaw shattered every citizen’s life! British librarian Sophie Kumiega awaits news of her deployed husband. In the Jewish ghetto, Rosa Dunovich welcomes her first child. But she soon realizes that to keep her daughter safe, she must send her into hiding. Will the dark days ahead draw these two women together? (Historical novel from Tyndale.)

The Kings Mercy by Lori Benton — When captured rebel Scotsman Alex MacKinnon is granted the king’s mercy-exile to the Colony of North Carolina-he’s indentured to Englishman Edmund Carey as a blacksmith. Against his will Alex is drawn into the struggles of Carey’s slaves and those of his stepdaughter, Joanna Carey. A mistress with a servant’s heart, Joanna is expected to wed her father’s overseer, Phineas Reeves, but finds herself drawn instead to the new blacksmith. As their unlikely relationship deepens, successive tragedies strike the Careys. When blame falls unfairly upon Alex he flees to the distant mountains where he encounters Reverend Pauling, itinerate preacher and friend of the Careys, now a prisoner of the Cherokees. Haunted by his abandoning of Joanna, Alex tries to settle into life with the Cherokees, until circumstances thwart yet another attempt to forge his freedom and he’s faced with the choice that’s long hounded him: continue down his rebellious path or embrace the faith of a man like Pauling, whose freedom in Christ no man can steal. But the price of such mercy is total surrender, and perhaps Alex’s very life. (Historical novel from WaterBrook Multnomah, Penguin Random House)

In the Shadow of the King by Melissa Rosenberger — Beset by doubts and jealousy about prophecies spoken over her brother Yeshua, Hannah struggles to see the truth before her eyes until it is too late…or is it? (Historical from Carpenter’s Son Publishing) 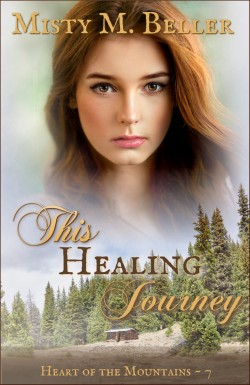 This Healing Journey by Misty M. Beller — An adventure-seeking wilderness girl and an ex-cavalryman looking to settle down fall in love while caring for a wounded Indian child that shows up in his barn. Will their differences keep them apart or become their greatest strengths? (Historical Romance, Independently Published)

Ever Faithful by Karen Barnett — A man who can’t read will never amount to anything–or so Nate Webber believes. But he takes a chance to help his family by signing up for the new Civilian Conservation Corps, skirting the truth about certain “requirements.” Nate exchanges the harsh Brooklyn streets for the wilds of Yellowstone National Park, curious if the Eden-like wonderland can transform him as well.
Elsie Brookes was proud to grow up as a ranger’s daughter, but she longs for a future of her own. After four years serving as a maid in the park’s hotels, she still hasn’t saved enough money for her college tuition. A second job, teaching a crowd of rowdy men in the CCC camp, might be the answer, but when Elsie discovers Nate’s secret, it puts his job as camp foreman in jeopardy. Tutoring leads to friendship and romance, until a string of suspicious fires casts a dark shadow over their relationship. Can they find answers before all of their dreams go up in smoke? (Historical Romance, WaterBrook Multnomah, Penguin Random House)

Where Dandelions Bloom by Tara Johnson — On the run from her abusive father and arranged marriage, Cassie Kendrick disguises herself and joins the Union army as Thomas Turner! Then she meets Gabriel Avery, a photographer’s assistant who is anxious to erase the darkness and guilt of his own past. Can this unlikely pair forgive themselves and trust the future to God? (Historical Romance from Tyndale.) 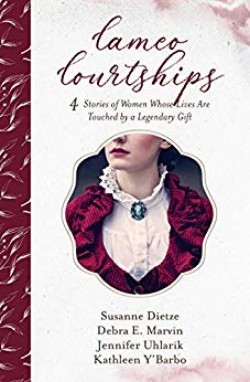 Cameo Courtships by Susanne Dietze, Debra E. Marvin, Jennifer Uhlarik, and Kathleen Y’Barbo — In 1851, a special cameo is gifted by Queen Victoria to Letitia Newton, who though considered an old maid, meets the perfect gentleman minutes after donning. Told by the Queen the cameo is to be shared, Letitia gifts the “Victoria Cameo” to a woman in her family, hoping adventure and romance will follow each of its subsequent wearers. Adventure indeed follows two competing journalists, one of whom carries the cameo while looking to expose a smuggler, a trouser-wearing frontierswoman and a reverend who are on a mission to ransom the cameo from a manipulative brothel owner, two Pinkertons who are charged with the care of the cameo but must rely on one another when the cameo is once again stolen, and a young woman who doubts the cameo can help her when a handsome Scottish library administrator ruins her dream of overseeing the new Carnegie Library children’s department and keeps a social chasm between himself and her father. (Historical Romance from Barbour Publishing) 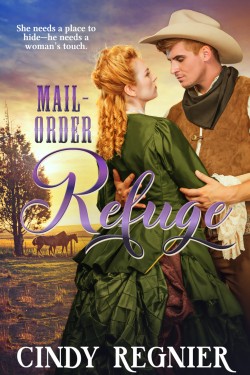 Mail-Order Refuge by Cindy Regnier — Carly Blair from Baltimore buys a train ticket to Kansas where she will become the wife of a man she’s never met. She must leave Baltimore to escape the evil plans her ex-fiance has for using her artistic talents for a counterfeit operation. Rand Stafford, Kansas cattle rancher is looking after his two orphaned nieces, but knows they need a mother. He’s not interested in love since being left at the altar so he advertises for a mail-order bride, willing to do whatever it takes to give Mary Jo and Jenna a proper home and upbringing. Can Carly and Rand find love where they least expect it, or will the shadows of the past dash their hopes for the future? (Historical Romance from Lighthouse Publishing of the Carolinas)

No Ocean Too Wide by Carrie Turansky — Between the years of 1869 to 1939 more than 100,000 poor British children were sent across the ocean to Canada with the promise of a better life. Those who took them in to work as farm laborers or household servants were told they were orphans—but was that the truth? A richly woven novel of heartache and hope that highlights child emigration of British Home Children to Canada. (Historical Romance from Waterbrook/Multnomah [Random House]) 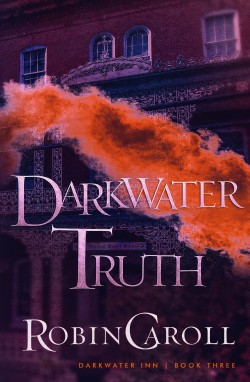 Darkwater Truth by Robin Caroll — Adelaide Fountaine, general manager, is enthusiastically renovating parts of the Darkwater Inn. Her intentions come to a screeching halt when a skeleton is found behind a makeshift wall—an axe beside it. As Adelaide works alongside owner Dimitri Pampalon and Detective Beau Savoie, the two men who have been pursuing her heart, she learns the eerie death has tentacles that reach deep into the seedy past of both the Darkwater Inn and the evil underground of New Orleans. The past and the present collide as the stakes are upped—not only for Adelaide’s heart, but for her very life and her father’s life as well. The threats are deadly, the coils of evil are tightening around everyone involved, and they are more powerful than anyone could have ever imagined. (Romantic Suspense, Independently Published)

Over the Line by Kelly Irvin — Gabriela’s brother is missing, he’s a suspect in a murder, and she’s in the cross hairs of a criminal organization. The only person who can help her is the one man she can’t trust. Will Gabby & Eli find her brother before it’s too late? (Romantic Suspense from HarperCollins Christian Publishing)

Long Walk Home by DiAnn Mills — As an Arab Christian pilot for a relief organization, Paul Farid feels called to bring supplies to his war-torn countrymen in southern Sudan. But with constant attacks from Khartoum’s Islamic government, the villagers have plenty of reasons to distrust Paul, and he wonders if the risks he’s taking are really worth his mission. American doctor Larson Kerr started working with the Sudanese people out of a sense of duty and has grown to love them all, especially Rachel Alier, her young assistant. But despite the years she’s spent caring for them, her life feels unfulfilled. It’s a void noticed both by Paul and by Rachel’s older brother, Colonel Ben Alier of the Sudanese People’s Liberation Army. When Rachel is abducted, Paul, Ben, and Larson agree to set aside their differences to form an unlikely alliance and execute a daring rescue. Their faith and beliefs tested, each must find the strength to walk the path God has laid before them, to find their way home. (Romantic Suspense from Tyndale House)

The Last Chaplain by Carl M. White — At the request of Pastor John Grant, the last chaplain of the United States Senate, Lisa Smithy embarks on the adventure of a lifetime: find a former Senate staff member and convince him to reveal to a DC reporter the plot that led to Dr. Grant’s removal and the discrediting of his best friend, a United States Senator. From the South, to the West, to the Midwest, evil men are desperate to stop her, and romance surprisingly finds her. Can she bring together the former Senate staffer who knows all and the Washington reporter who can tell all, while eluding the men who would end it all? (Romantic Suspense from Austin Brothers Publishers)