Hi Friends, I hope you’re enjoying your summer! Reading is a great way to relax and take a break. I hope you’ll scroll down the list and find a new book to enjoy! These are the new releases from American Christian Fiction Writers authors. 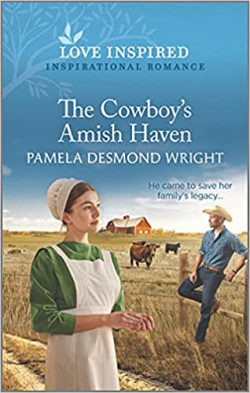 The Cowboy’s Amish Haven by Pamela Desmond Wright — Her home and her heart are on the line…  On the same day Gail Schroder’s faced with losing her Amish family ranch, her old crush Levi Wyse shows up on her doorstep. He doesn’t know that when he left ten years ago he’d taken Gail’s heart with him. Now Levi’s her only hope of keeping a roof over her head. But can this cowboy teach Gail the ropes in time to save her home? (Amish Romance from Love Inspired (Harlequin)) 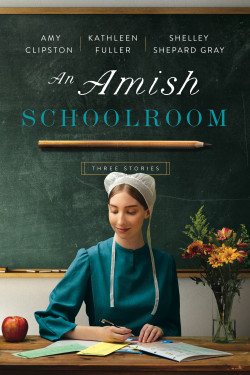 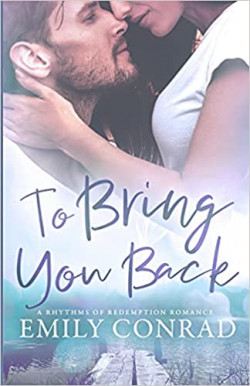 To Bring You Back by Emily Conrad — He’s determined to confront the past she’s desperate to forget. When Adeline Green’s now-famous high school crush descends on her quiet life, a public spotlight threatens to expose her deepest regret. After eight years of trying to bury her mistakes under a life of service, she’s broke financially and spiritually. The last thing she can afford is feelings for the man who took center stage in her past—even if he does claim to know the secret to her redemption. But when Gannon’s fame and their mutual regrets jeopardize their relationship anew, will grace be enough to bring them back to God and each other? (Contemporary Romance, Independently Published) 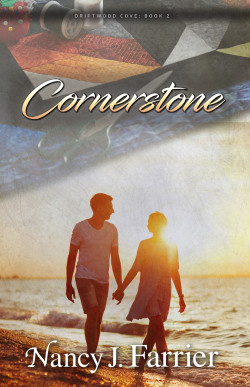 Cornerstone by Nancy J. Farrier — She’s been hurt one time too many—can his patience and love may heal her empty places. (Contemporary Romance, Independently Published) 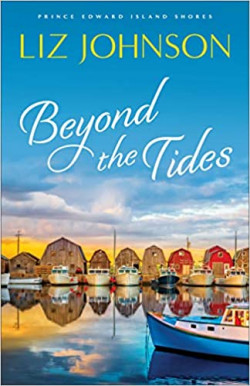 Beyond the Tides by Liz Johnson — When Meg Whitaker’s father decides to sell the family’s lobster-fishing business to her high school nemesis, she sets out to prove she should inherit it instead. Though she’s never had any interest in running the small fleet–or even getting on a boat due to her persistent seasickness–she can’t stand to see Oliver Ross take over. Not when he ruined her dreams for a science scholarship and an Ivy League education ten years ago.
(Contemporary Romance from Revell – A Division of Baker Publishing Group) 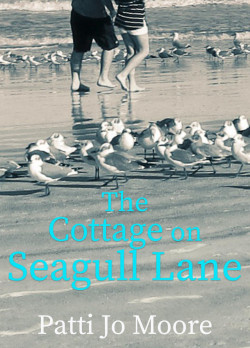 The Cottage on Seagull Lane by Patti Jo Moore — Mindi Kirkland hopes her move to the quaint town of Ocean Mist, Florida, will help her move forward in her life. The widowed introvert is happy to live closer to her grown daughter, and has no interest in romance after enduring a painful marriage to an alcoholic. (Contemporary Romance from Winged Publications) 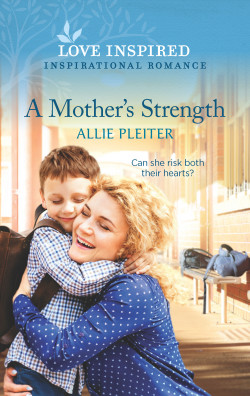 A Mother’s Strength by Allie Pleiter — Will finding her son a friend lead to forever love? Single mom Molly Kane will do anything to help her son overcome his anxieties—including enlisting former police officer Sawyer Bradshaw to give him golf lessons. Sawyer’s a loner, yet he quickly forms a bond with little Zack. And with Molly. But protecting Zack means Molly must keep her heart off-limits from Sawyer, even as her little boy draws them together…(Contemporary Romance from Love Inspired (Harlequin)) 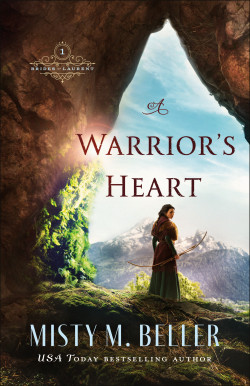 A Warrior’s Heart by Misty M. Beller — Brielle Durand is a key defender and hunter for her people’s peace-loving French settlement in the Canadian mountains. When a foreigner wanders too near to their secret homes, she has no choice but to disarm and capture him. She won’t allow another massacre like the one that killed her mother a dozen years before. But now, what to do with this man who looks at her in a strange way? (Historical Romance from Bethany House (Baker) Publishing) 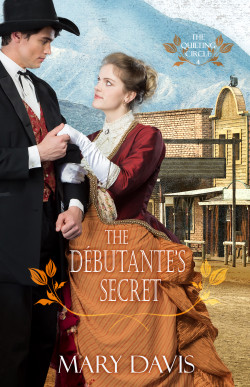 The Debutante’s Secret by Mary Davis — Will Geneviève open her heart to a love she never imagined? Geneviève Marseille, a French socialite, has only one purpose in coming to Kamola—stopping her brother from digging up the past. She has reluctantly journeyed alone to the quaint college town in central Washington State. Kamola is so different from her beloved Paris that she is tempted to abort her mission, but the kindness of a handsome deputy tempers her desire to flee. (Historical Romance from Mountain Brook Ink) 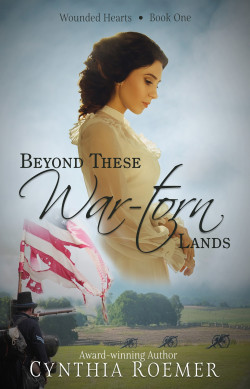 Beyond These War-Torn Lands by Cynthia Roemer — The War brought them together ~ Would it also tear them apart? While en route to aid Confederate soldiers injured in battle near her home, Southerner Caroline Dunbar stumbles across a wounded Union sergeant. Unable to ignore his plea for help, she tends his injuries and hides him away, only to find her attachment to him deepen with each passing day. But when her secret is discovered, Caroline incurs her father’s wrath and, in turn, unlocks a dark secret from the past which she is determined to unravel. (Historical Romance from Scrivenings Press) 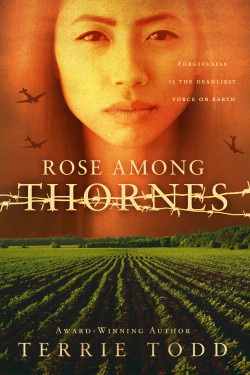 Rose Among Thornes by Terrie Todd — War might be raging overseas, but Rose Onishi is on track to fulfill her lifelong goal of becoming a concert pianist. When forced by her government to leave her beloved home in Vancouver and move to the Canadian prairie to work on the Thornes’ sugar beet farm, her dream fades to match the black dirt staining her callused hands. Though the Thorne family is kind, life is unbearably lonely. In hopes that it might win her the chance to play their piano, Rose agrees to write letters to their soldier son. Will Rusty survive the war only to encounter the Japanese on his own doorstep? Can Rose overcome betrayal and open her heart? Or will the truth destroy the fragile bond their letters created? (General Historical from Lighthouse Publishing of the Carolinas) 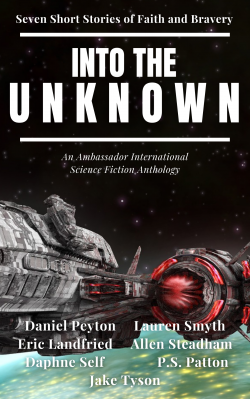 Into the Unknow by Daphne Self, Daniel Peyton, Lauren Smyth, Eric Landfried, Allen Steadham, P.S. Patton, and Jake Tyson
— Humanity has spread and colonized regions of the galaxies. As their reach expanded, countries, colonies, and planets joined to form the Federated Nations, providing a centralized government among the stars. Along with the Science Conglomerate—who explores and researches the unknown regions—and the Judicial Clerical Court—purveyors of truth, history, and justice—humanity discovers new beings, wondrous worlds, old temptations, and strength in horrendous trials. (Speculative from Ambassador International) 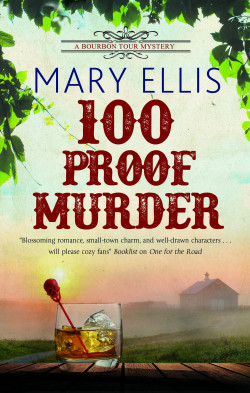 One Hundred Proof Murder by Mary Ellis — ravel writer Jill Curtis is in Louisville, Kentucky, on the next stop of her bourbon tour assignment, and is keen to explore the local distilleries with her videographer, Michael Erickson – especially since her new beau, Lieutenant Nick Harris, lives in the city. But the night before Jill’s first tour at Parker’s Distillery, she is shocked to learn that the master distiller, William Scott, has died suddenly of a heart attack – and even more shocked when she discovers William’s daughter, Alexis, suspects foul play. Is there more to William’s death than meets the eye? Jill is soon drawn into a deadly blend of rivalry, jealously, and cold-blooded murder as she attempts to uncover the truth behind William’s unexpected demise. (Cozy Mystery from Severn House) 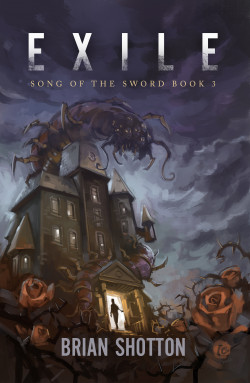 Exile by Brian Shotton — Gone for three years, Scott returns home to find Aurora in decay. A curse has descended on the small Kentucky town. Someone is convincing the young to take their own lives, and with each suicide the death-cycle grows stronger, entangling all it touches. Scott and Father Stan must find the source of the evil if they hope to heal and restore community. Meanwhile, Dee and Tim find their own trouble at the Order of the Third Sister. A demon has infiltrated the Sisters, hellbent on discovering the truth behind the prophecy of the Scion and secretly ushering in the destruction of the enclave. (Thriller/Suspense/Biblical, Independently Published)

Hunt for a Hometown Killer by Mary Dodge Allen, Small towns have secrets and skeletons… what happens when a sinkhole uncovers them? (Thriller/Suspense)

P.W. Stone and the Missing Kingdom by S.C. Easley, Sometimes the planets and stars do align. Enter the Kingdom Realms, where the unseen is seen, and battles must be won… (Children’s/Middle Grade)

The Fire Within Us by Greg N. Ford, About to turn thirty, Tom Barton’s life as a fireman/farmer is turned upside down when he meets a beautiful, intriguing woman and someone starts attacking him. (Action/Adventure/Contemporary)

Justice at Dawn by Valerie Massey Goree, When a training exercise turns deadly, can Agent Callahan save the rookie, the abducted family, and himself? (Thriller/Suspense/Romance)

Entering the Zone: Helena by Barbara James, Visiting Mrs. Caldwell on Sunday afternoons was one thing. Dealing with Leon, her skeptical grandson, was another.
(Contemporary Romance)

In Search of True North by Kathleen Neely, She lost her son twelve years ago. Now that she’s part of his life, will history repeat itself? (Contemporary Romance)

Betrayal of Genius by Robin Patchen, Join Jacqui and Reid as they navigate this pulse-pounding, faith-filled adventure into the high-stakes world of medical research, innovation, and greed. (Thriller/Suspense/Romance)

Mendicant by Brian Shotton, In the shadows of New Orleans, evil hunts children. And Dee, a one-time Voodoo princess, has discovered why. (Thriller/Suspense/Biblical)

Sweet Summer by Christina Sinisi, Can Shelby let her sisters, Tyler, and even more importantly, God, show her in one Sweet Summer, that love is worth taking the risk? (Contemporary Romance)

Potato Flake Christmas by Cathe Swanson, It seemed like such a good idea at the time… (Contemporary Romance)