Imperfect Lies by Elizabeth Noyes — When another woman emerges from the past to claim Mallory Cameron’s happily ever after, she cuts her losses and sets out to find a headline-worthy story to launch her journalism career. She embarks on a whirlwind journey that takes her across the United States, to the blue-green waters of the Caribbean, on to sunny Mexico, and deep into the dangerous parts of Africa where terror reigns. James Evers turned his back on a life of power and privilege to carve a place in the world for himself. Now that he’s finally discovered his niche as a small-town sheriff and found the woman he wants in his future, a past indiscretion struts in on high heels and sends his newfound love fleeing headlong into peril. His mission: neutralize old enemies, defuse new threats, resolve past mistakes, settle family disputes, and—most importantly—find and rescue his woman from terrorists before the unthinkable happens. (Action/Adventure from Write Integrity Press)

The Bachelor’s Unexpected Family by Lisa Carter — Young widow Kristina Montgomery moves to Kiptohanock, Virginia, hoping it will give her and her teenage son, Gray, a fresh start. She longs for the peace and quiet only a small town can provide. But her plans are thwarted by her new neighbor, Canyon Collier, a former Coast Guard pilot and a crop duster. Gray is instantly drawn to the pilot and his teenage niece, Jade—and Kristina’s not far behind. She and Canyon are soon bonding over parenting their charges and their spark becomes undeniable. Could it be that the spirited pilot is just what Kristina needs to teach her heart to soar again? (Contemporary Romance from Love Inspired [Harlequin])

Gift of the Magpie by Zoe M. McCarthy — Amanda Larrowe’s lack of trust sabotages her relationships. The English teacher and award-winning author of middle-grade adventure books for boys has shut off communication with friends and family to meet her January 2 book deadline. Now, in the deepest snow accumulation Richmond, Virginia, has experienced in years, Camden Lancaster moves in across the street. After ten years, Amanda’s heart still smarts from the humiliating aftermath of their perfect high-school Valentine’s Day date. Camden may have transformed into a handsome, amiable man, but his likeability doesn’t instill trust in Amanda’s heart. When Cam doesn’t recognize her on their first two encounters, she thinks it’s safe to be his fair-weather neighbor. Boy is she wrong. (Contemporary Romance from Lighthouse Publishing of the Carolinas)

A Mother for Leah by Rachel L. Miller –It’s been ten years since Leah Fisher’s mother died in a buggy accident. But when Leah’s father shows interest in Naomi Yoder, Leah isn’t ready for a new mother. Will Leah be able to let go of her own ideas and realize that God truly does know best for her or will she allow love to slip through her fingers, destroying Samuel Fisher and Naomi Yoder’s happiness at the same time? (Contemporary from S & G Publishing)

Freedom’s Ring by Heidi Chiavaroli — An antique ring reunites a Boston Marathon bombing survivor with the man who saved her. Together they unearth the two-hundred-year- old history of a woman who suffered tremendous loss in the Boston Massacre, a woman torn between the love of two men – one a patriot, one a Redcoat. (General Contemporary from Tyndale House) 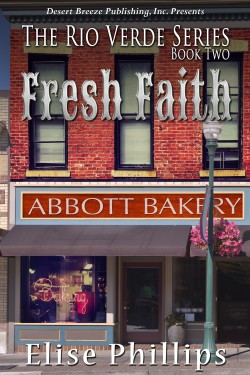 Fresh Faith by Elise Phillips — Joy Abbott had been trying to start her life over for years — and failing. Then a letter summoned her to Texas and everything changed. (General Contemporary from Desert Breeze Publishing)

Enchanted Isle by Melanie Dobson — In the spring of 1958, Jenny Winter embarks on a two-month adventure to a quaint village in England’s magical Lake District. With a new camera and an eye for capturing the beauty others miss, she can’t wait to explore the heathery fells and mystical waters. Adrian Kemp, a handsome and enigmatic local, makes the sightseeing even more beguiling. When Adrian shows Jenny his late father’s abandoned dream, a deserted island amusement park, she glimpses a kindred spirit in this reckless, haunted young man. Yet as she opens her heart to Adrian, the two stumble into a mystery leading back a generation to an unforgettable romance and an unsolved murder. As long-held secrets come to light, it’s left to Jenny and Adrian to put the past to rest and restore a lost dream. (Historical from Waterfall Press)

Titus: The Aristocrat by Katheryn Maddox Haddad — Titus intends to become a famous lawyer in the Roman Empire. Instead, he is sent by Paul to arbitrate between arch enemies in wild Corinth, wilder Crete, and wildest Dalmatia. In each place he suffers. But, long before that, he suffers from guilt over the death of his mother when he was eleven years old. How does Titus survive it all? (Historical from Northern Lights Publishing House)

To Wager Her Heart by Tamera Alexander — With fates bound by a shared tragedy, a reformed gambler from the Colorado Territory and a Southern Belle bent on breaking free from society’s expectations must work together to achieve their dreams – provided the truth doesn’t tear them apart first. (Historical Romance from Zondervan)

The Second Chance Brides Collection by Lauralee Bliss, Angela Breidenbach, Ramona K. Cecil, Pamela Griffin, Grace Hitchcock, Pam Hillman, Laura V. Hilton, Tiffany Amber Stockton, and Liz Tolsma — Meet nine women who each believe their chance for lifelong love has passed them by. From the girls who lost their beaus to war, to the wallflowers overshadowed by others, and the widows deeply hurt by their loss, the desire to love and be loved spans American history from 1777 to 1944. Experience the sweet pull of romance on each life and the blossom of faith that leads them to brighter futures. (Historical Romance from Barbour Publishing)

The Promise of Breeze Hill by Pam Hillman — Anxious for his brothers to join him on the rugged frontier along the Mississippi River, Connor O’Shea has no choice but to indenture himself as a carpenter in exchange for their passage from Ireland. But when he’s sold to Isabella Bartholomew of Breeze Hill Plantation, Connor fears he’ll repeat past mistakes and vows not to be tempted by the lovely lady. The responsibilities of running Breeze Hill have fallen on Isabella’s shoulders after her brother was found dead in the swamps along the Natchez Trace and a suspicious fire devastated their crops, almost destroyed their home, and left her father seriously injured. Even with Connor’s help, Isabella fears she’ll lose her family’s plantation. Despite her growing feelings for the handsome Irish carpenter, she seriously considers accepting her wealthy and influential neighbor’s proposal of marriage. Soon, though, Connor realizes someone is out to eliminate the Bartholomew family. Can he set aside his own feelings to keep Isabella safe? (Historical Romance from Tyndale House)

Chasing Secrets by Lynette Eason — When a photo leads investigators in West Ireland to open a twenty-five-year-old cold case, Elite Guardians bodyguard Haley Callaghan’s life is suddenly in danger. Haley knows how to take care of herself; after all, she’s made a career out of taking care of others. But after she has an uncomfortably close call, Detective Steven Rothwell takes it upon himself to stay with her–and the young client she has taken under her wing. A protector at heart, he’s not about to let Haley fight this battle alone. In a sweeping plot that takes them into long-buried memories–and the depths of the heart–Haley and Steven will have to solve the mystery of Haley’s past while dodging bullets, bombs, and bad guys who just won’t quit. (Romantic Suspense from Revell [Baker])

Plain Retribution by Dana R. Lynn — Ten years ago while on rumspringa, Rebecca Miller and her friends were kidnapped and held captive…and now, living in the English world, she’s nearly abducted again. One by one her friends who once helped send their abductor to jail are targeted, and she is next…unless police officer Miles Olsen can stop a killer. Deaf since birth, the only person on the force that Rebecca can communicate with is Miles, and he needs this case to redeem himself of past mistakes. When the relentless killer tracks them deep into the heart of Amish country, protecting Rebecca must be Miles’s sole focus. Because a mistake this time will cost something worth more to him than his job—the woman he’s falling for. (Romantic Suspense from Love Inspired [Harlequin])

Cold Blooded by Anne Patrick — Detective Gwen Jamison has the highest closure rate in her division, but a string of armed robberies is about to take over her life. Not only will her job be on the line, but the troubling case also wreaks havoc on her personal life. Lieutenant Ian McKean knew he would have his hands full when he took over leadership of the detectives unit. He wasn’t prepared for the headstrong Detective Jamison, though, who quickly becomes a thorn in his side. If they can stop butting heads long enough they might realize they are more alike than either imagined. (Romantic Suspense from Anne Patrick)