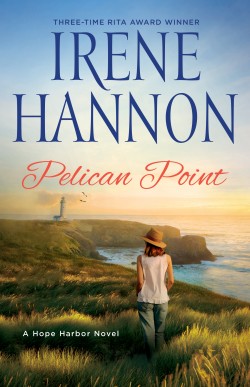 Pelican Point by Irene Hannon — After inheriting a crumbling lighthouse, ex-Army doctor Ben Garrison wants to sell it. But Hope Harbor Herald editor Marci Weber is determined to save the town landmark. Can these two romance-wary souls finds a meeting of the minds…and hearts? (Contemporary Romance from Revell – A Division of Baker Publishing) 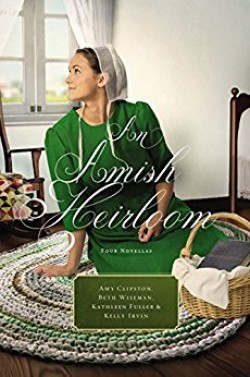 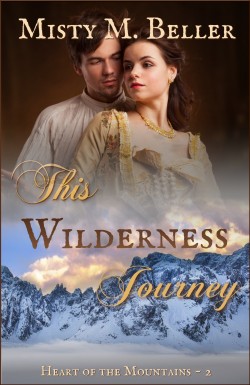 This Wilderness Journey by Misty Beller — He’s been sent to retrieve the new missionary… But she’s not at all who he expects to find. (Historical Romance, Independently Published) 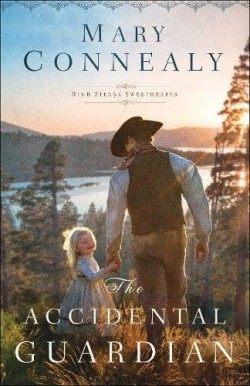 The Accidental Guardian by Mary Connealy — Deborah and her sister and two little children survive a wagon train massacre. Trace finds them and takes them home. He finds himself their accidental guardian. He must protect them all and gain justice. When he does, all these friendly visitors–especially Deborah–will leave him forever. (Historical Romance from Bethany House [Baker]) 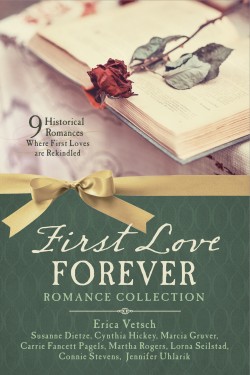 First Love Forever Romance Collection by Susanne Dietze, Marcia Gruver, Cynthia Hickey, Carrie Fancette Pagels, Martha Rogers, Lorna Seilstad, Connie Stevens, Erica Vetsch, and Jennifer Uhlarik — Coming face to face with a lost love can be awkward when the heartstrings are still holding on to the “what ifs.” In settings from 1865 to 1910, nine couples are thrown back on the same path by life’s changes and challenges. Can love rekindle despite the separation of time and space? (Historical Romance from Barbour Publishing) 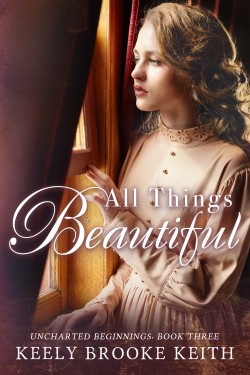 All Things Beautiful by Keely Brooke Keith — It’s 1868 in the settlement of Good Springs, and Hannah Vestal is passionate about writing fiction and keeping her stories to herself. When her father asks to read her work, she decides to have it printed secretly for his 50th birthday. Hannah tries to arrange the printing with the settlement’s pressman, but the witty and dapper Henry Roberts has better things to do with his ink. In order to secure settlement support for his printing press, the elder council says Henry must print an error-free copy of the New Testament before the settlement’s 8th anniversary celebration. He is determined to meet their challenge, but when the enigmatic Hannah proves to be a beguiling distraction, Henry longs for something more than a life at the letterpress. (Historical Romance from Edenbrooke Press) 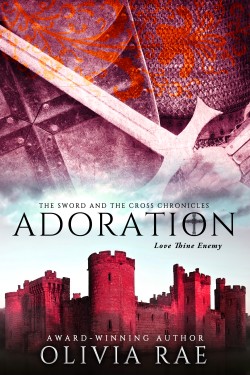 Adoration by Olivia Rae — Sir Darrin de Longue is desperate to get his lands back from Lady Faith de Sainte-Marie, the woman who betrayed him and may have had a hand in his father’s murder. But King Richard discloses on his deathbed that Lady Faith is the king’s daughter and then issues an ultimatum Darrin must obey. In order to reclaim his lands, he must marry Lady Faith and get her with child in a year’s time. Lady Faith has loved the rowdy and bold Sir Darrin since childhood, but cannot be a true wife to the bitter, angry man whom she has wed. In order to gain his trust and love, she vows to find the truth about his father’s murder. But when she stumbles upon deadly secrets, will she be able to prove her innocence–and his–to erase the past and win Darrin’s heart? (Historical Romance from HopeKnight Press) 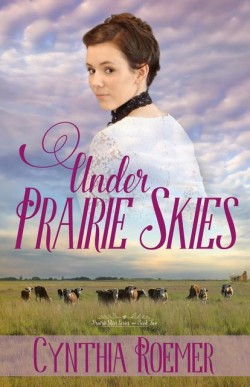 Under Prairie Skies by Cynthia Roemer — Illinois prairie, 1855. Unsettled by the news that her estranged cousin and uncle are returning home after a year away, Charlotte Stanton goes to ready their cabin and finds a handsome stranger has taken up residence. Convinced he’s a squatter, she throws him off the property before learning his full identity. Little does she know, their paths are destined to cross again. Quiet and ruggedly handsome, Chad Avery’s uncanny ability to see through Charlotte’s feisty exterior and expose her inner weaknesses both infuriates and intrigues her. When a tragic accident incites her family to move east, Charlotte stays behind in hopes of becoming better acquainted with the elusive cattleman. Yet Chad’s unwillingness to divulge his hidden past, along with his vow not to love again, threatens to keep them apart forever. (Historical Romance from Mantle Rock Publishing) 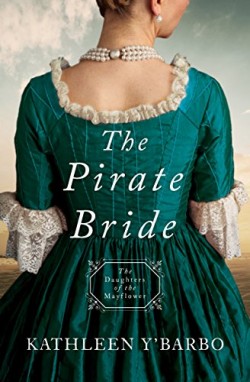 The Pirate Bride by Kathleen Y’Barbo — The last time New Orleans attorney Jean-Luc Valmont saw Maribel Cordoba, a Spanish nobleman’s daughter, she was an eleven-year-old orphan perched in the riggings of his privateering vessel proving herself as the best lookout on his crew. Until the day his infamy caught up with them all and innocent lives were lost. Unsure why he survived but vowing to make something of the chance he was given, Jean-Luc has buried his past life so deep that no living person will ever find it—until a very much alive and very grown up Maribel Cordoba arrives on his doorstep and threatens all he now holds dear. (Historical Romance from Barbour Publishing)

Shadows of Hope by Georgiana Daniels — Crisis pregnancy worker Marissa Moreau suspects her husband is cheating, but little does she know how close to home her husband’s infidelity hits. College student Kaitlyn Farrows is floundering after a relationship with her professor leaves her pregnant. Soon she lands a job and a support system at the local pregnancy resource center and things seem to be turning around. But when Marissa and Kaitlyn become friends, neither one knows they share a connection—Colin, Marissa’s husband and Kaitlyn’s former professor. When their private lives collide, the two women must face the ultimate test of their faith and choose how to move forward as they live in the shadows of hope. (General Contemporary from Barbour Publishing)

Secret Past by Sharee Stover — With gunmen at her doorstep, Katie Tribani learns her true identity. She’s been in witness protection since childhood, and now her crime-lord father has found her. (Romantic Suspense from Love Inspired [Harlequin])

Chase by Glenn Haggerty — Tyler, a middle school newbie, shadows drug runners to rat out the methamphetamine dealer before his friend turns into a brain-dead druggie. (Young Adult, Independently Published)
Until Next Time – Happy Reading,

What I’m Reading :: Lori Benton’s novel, Shiolh, for endorsement and I’m listening to the audio version of Heidi by Johanna Spyri. Both are wonderful!

In His Word :: I’m doing the study Truthfilled by Rutho Chou Simons with our women’s Bible study. And we’re working our way through the Book of Genesis on Sunday mornings with the Calvary Chapel Living Hope family.