Hi Friends, As the weather cools I hope you’ll have time to get cozy and enjoy a good book or two! These are the new October releases from American Christian Fiction Writers member authors. 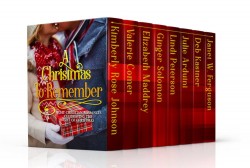 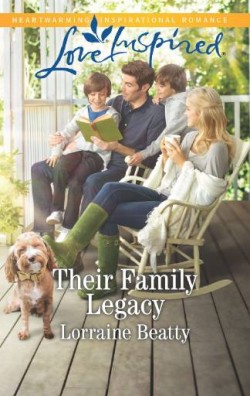 Their Family Legacy by Lorraine Beatty — Annie’s inheritance will provide a home for her twins and all she had to do is keep a man paying for his mistake forever. (Contemporary Romance from Love Inspired [Harlequin]) 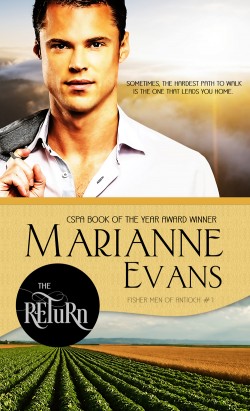 The Return by Marianne Evans — A prodigal who never wanted to return home must repair his family farm and rush back to the big city before an old love convinces him to stay. (Contemporary Romance from White Rose Publishing [Pelican]) 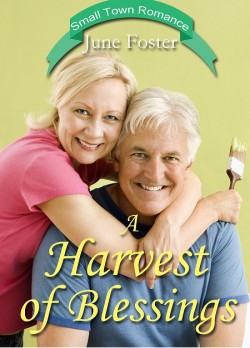 A Harvest of Blessings by June Foster — When Nadia accidentally sits on a stranger’s lap in the graveyard where her late husband is buried, she’s horrified to learn the good-looking guy with salt and pepper hair is her new boss. Jared is intrigued by this beautiful woman who puts God first in her life, but his daughter isn’t ready for him to move on after his wife’s death. As Nadia and Jared try to cultivate a relationship, will they reap a Harvest of Blessings, or a season of drought? (Contemporary Romance from Forget Me Not Romance [Winged Publication]) 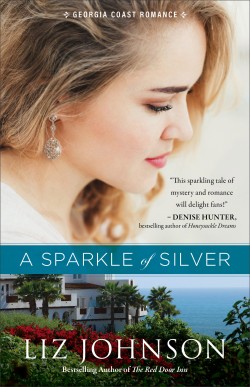 A Sparkle of Silver by Liz Johnson — Ninety years ago, Millie Sullivan’s great-grandmother was a guest at banker Howard Dawkins’ palatial estate on the shore of St. Simons Island, Georgia. Now, Millie plays a 1920s-era guest during tours of the same manor. But when her grandmother suggests that there is a lost diary containing the location of a hidden treasure on the estate, along with the true identity of Millie’s great-grandfather, Millie sets out to find the truth of her heritage–and the fortune that might be hers. When security guard Ben Thornton discovers her snooping in the estate’s private library, he threatens to have her fired. But her story seems almost too ludicrous to be fiction, and her offer to split the treasure is too tempting to pass up . . . (Contemporary Romance from Revell – A Division of Baker Publishing Group) 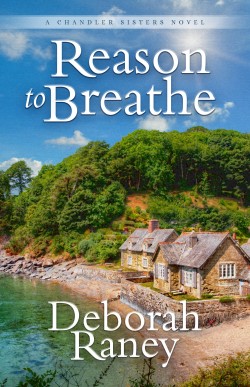 Reason to Breathe by Deborah Raney — At twenty-nine, Phylicia Chandler put her life on hold to care for her dying mother with her sisters, Joanna and Britt. Now Mom is gone and their father has run off with a woman young enough to be their sister. Phylicia feels stuck–until her father’s protégé, Quinn Mitchell, presents her and her two sisters with an intriguing business opportunity to purchase a trio of cottages just outside of Langhorne, Missouri. But Phylicia is skeptical. Quinn soon finds himself falling hard for Phylicia. But how can he pursue this beautiful, talented woman twelve years his junior when she’s still reeling over her father’s hasty engagement to a younger woman? Quinn is determined to give Phylicia her happily-ever-after. But first, he must help her come to terms with her discovery of long-held family secrets and persuade her that true love can transcend their differences. (Contemporary Romance from Gilead Publishing) 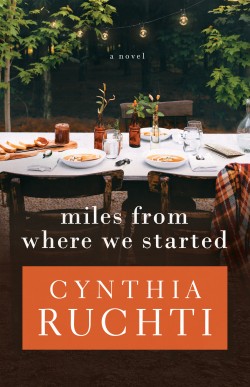 Miles from Where We Started by Cynthia Ruchti — These no-longer-newlyweds want out of this road trip–and their marriage. Too bad they can’t find the off-ramp. (General Contemporary from Gilead Publishing)

When the Heart Sings by Liz Tolsma — In 1943 Poland, the Nazis have forced Natia and Teodor from their peaceful farm to the harsh confines of a labor camp. When the couple is separated, Natia risks everything to send him messages through song as she passes Teodor’s dormitory. The stakes get higher when Natia finds a Jewish orphan on the doorstep where she works. She is determined to protect the boy and raise him as the child she and her husband were unable to bear—but if her German captors discover how much she’s hiding, both she and Teodor may pay the ultimate price. (Historical from Gilead Publishing) 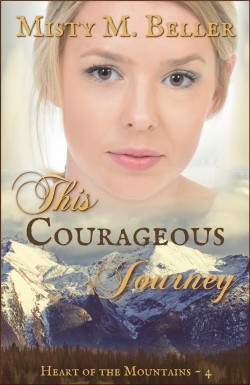 This Courageous Journey by Misty M. Beller — When Noelle Grant sets off to visit her brother in the Canadian Rockies, the prospect of making a name for herself as a news correspondent finally seems within reach. But when the dangers become more than she bargained for, she finds herself—and the mountain man she’s come to love—in a situation more hazardous than any story her imagination could conjure. (Historical Romance, Independently Published [ACFW QIP]) 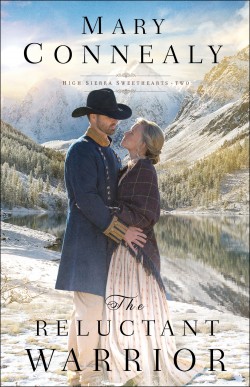 The Reluctant Warrior by Mary Connealy — Union army officer Cameron Scott is used to being obeyed, but nothing about this journey to Lake Tahoe has gone as expected. He’s come to Lake Tahoe to fetch his daughter and nephew, and seek revenge on the people who killed his brother. Instead he finds himself trapped by a blizzard with two children who are terrified of him and stubborn but beautiful Gwen Harkness, who he worries may be trying to keep the children. (Historical Romance from Bethany House [Baker] Publishing) 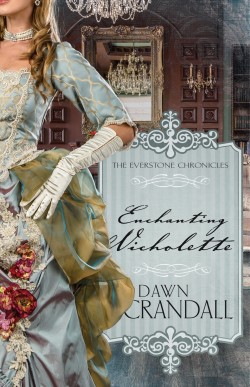 Enchanting Nicholette by Dawn Crandall — As she acclimates to life in Back Bay again, Nicholette Everstone meets someone she can’t help but fall for. But when she learns of the danger and sacrifices Cal Hawthorne takes on for the safety of others, will her heart be strong enough to keep her fears of “what if” at bay? (Historical Romance from Whitaker House) 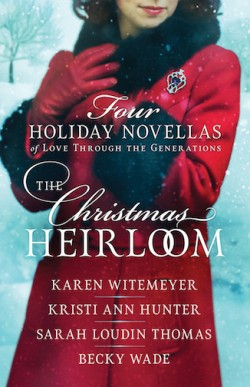 The Christmas Heirloom by Kristi Ann Hunter, Sarah Loudin Thomas, Becky Wade, and Karen Witemeyer — A family heirloom brings true love to its bearers through the generations as it is handed down from mother to daughter. (Historical Romance from Bethany House [Baker] Publishing) 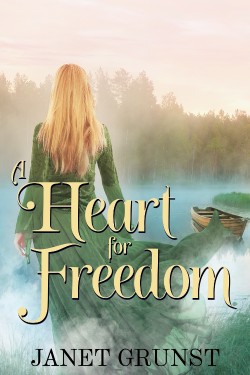 A Heart for Freedom by Janet Grunst — Life was better than she dreamed, now the conflict between the British and the colonists threatened the loss of everything dear, even her husband. (Historical Romance from Lighthouse Publishing of the Carolinas) 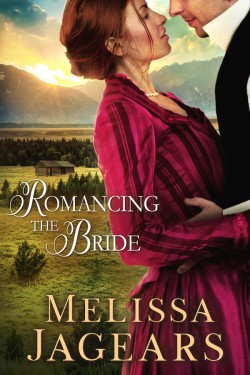 Romancing the Bride by Melissa Jagears — Marrying a stranger to save a ranch is one thing; losing the land on their wedding day is another. Desperate to keep the ranch where three of her children and a husband lie buried, Annie Gephart must marry or sell. Which of the few bachelors in town would consider a surprise proposal to wed a plain widow with a rebellious daughter, a spirited boy, and unpaid taxes—without laughing in her face? (Historical Romance, Independently Published [ACFW QIP]) 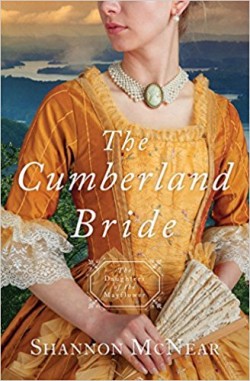 The Cumberland Bride by Shannon McNear — Thomas Bledsoe and Kate Gruener are traveling the Wilderness Road when conflicts between natives and settlers reach a peak that will require each of them to tap into a well of courage. (Historical Romance from Barbour Publishing) 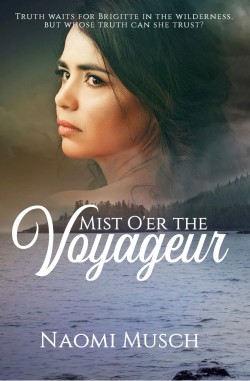 Mist O’er the Voyageur by Naomi Musch — Desperate to flee a cruel suitor, Metis woman Brigitte Marchal flees into the wilderness to find her long-lost, fur-trader father, but who will save her from the dangers of being a woman among a voyageurs’ brigade? (Historical Romance from Lighthouse Publishing of the Carolinas)

Five Years In Yemen by Luana Ehrlich — When the President issues a memorandum to bring home a military scientist who went missing in Iraq, CIA operative Titus Ray has been given the assignment. However, when the mission takes an unexpected turn after his contact is murdered in Riyadh, Titus is forced to make changes in the mission’s protocols, changes that endanger his operational team and have lasting consequences for his future. (Romantic Suspense, Independently Published [ACFW QIP]) 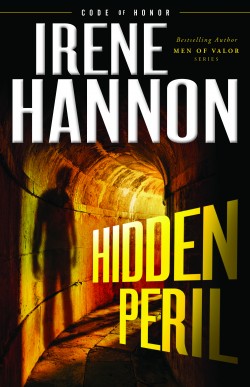 Hidden Peril by Irene Hannon — A woman who owns a fair trade shop and a police detective find themselves plunged into international intrigue—and danger—when people connected with her shop begin dying. (Romantic Suspense from Revell – A Division of Baker Publishing Group) 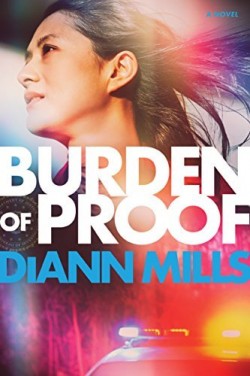 Burden of Proof by DiAnn Mills — A hostage negotiator is thrust into danger and betrayal when a frazzled young woman shoves a crying baby into her arms, then disappears. (Romantic Suspense from Tyndale House) 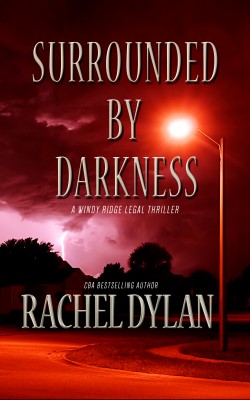 Surrounded by Darkness by Rachel Dylan — When attorney Olivia Murray opens a legal clinic for victims of domestic violence in Windy Ridge, she knows she will face legal and spiritual opposition. The New Age presence has grown stronger as alliances form between groups hoping to spread their destructive way of life and gain a stronghold in the community. While the forces of evil target Olivia’s new clinic, her legal partner Grant Baxter, and her relationships, she refuses to let them stop her quest for justice. Will Olivia’s and Grant’s faith be strong enough—in God and each other—to prevail in the battle that threatens to bring darkness to the entire town? (Supernatural Thriller, Independently Published [ACFW QIP]) 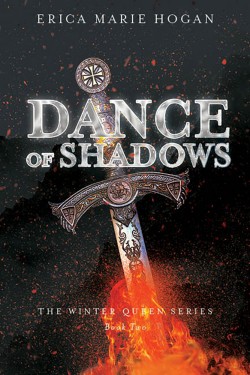 A Dance of Shadows by Erica Marie Hogan — Ten days have passed since Sundragon blood was shed for a sacrifice by Raphaela Kael. Ten days since Lathan and Maxx Jandry fled the city in search of Princess Damari Kael and their niece, Noelle. Brecken Jandry, Brae’s loyal husband, remains a tortured prisoner in the Kael dungeons and no one in Sunkai is safe from Roderick and Raphaela’s wrath. Damari Kael flees Sunkai with little Noelle Jandry, determined to deliver the child to the safety of the Shadow Lands, even as her own power emerges within her. The Eventide Sisters embark on a mission to join the Winter Queen. Across the land, Clea Jandry arrives in her birthplace of Molderëin where she is met with a savagery she thought long dead. Afra Malaki seeks the Creator’s will and the Queen of the Woodlands prepares for battle. In the peaceful city of Quintaria, the Winter Queen grieves. But the shadows are coming for her. They carry a message for Adlae Sundragon, and they will not rest until all is revealed. (Fantasy from Elk Lake Publishing, Inc.)

Body By Blood by Dr. Patrick Johnston — In the not-too-distant future, where cloned bodies are marketable commodities among the super-rich, leaving graveyards of trampled dehumanized classes in science’s wake, the richest man in the world who pioneered the breakthrough technologies learns the meaning of true love from a disabled granddaughter. (Speculative Action Adventure from Ambassador International) 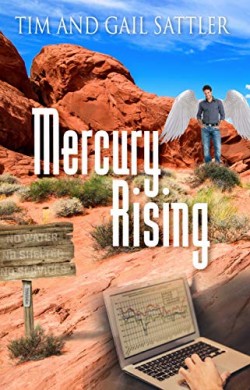 Mercury Rising by Tim and Gail Sattler — Four ordinary people are thrown into an extraordinary situation when they are thrown into a diabolical plot hidden under the guise of global warming. (Contemporary Fantasy from Mantle Rock Publishing)

The Awakened by Richard Spillman — If Lazarus didn’t die a second time what would he be up to today? (Speculative from Mountain Brook Ink)

Work in Progress :: I just turned in No Journey Too Far to my editor. This is the sequel to No Ocean Too Wide that releases spring 2021.

In His Word :: I’m reading through the Bible in a Year with an online group led by Biblical fiction author, Mesu Andrews. And we’re working our way through the Book of 1 Thessalonians on Sunday mornings with the Calvary Chapel Living Hope family, online with Facebook Live.